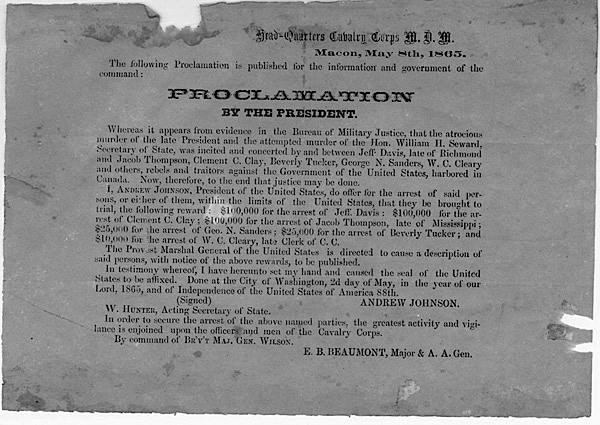 ASSASSINATION OF LINCOLN: A HISTORY OF THE GREAT CONSPIRACY-TRIAL OF THE CONSPIRATORS BY A MILITARY COMMISSION published in 1892 by T.M. HARRIS, a retired Brigadier-General and former Member of the Commission

CONSPIRACY COURT TESTIMONY OF RETIRED U.S. ARMY GENERAL T.M. HARRIS: We thus see the desperate character of the political leaders of the rebellion, who were ready to frustrate the expressed will of the people by resorting to assassination. We need not think strange that a rebellion which was ready to resort to such means in its incipiency should finally expire under the weight of this infamy.

By these secret organizations, the enemies of the government, wherever they might be, possessed the means of a secret recognition amongst their members. And under whatever circumstances they might be placed, the obligations of their oath afforded them confidence and security. They constituted a brotherhood, and by their secret grips, signs, passwords, etc., they had a guarantee of unity of sentiment and of purpose, and of faithfulness to each other and to the obligations of their oath.

These organizations were regarded as allies by the rebel government, and were counted on as a valuable factor to secure the success of its arms. This element in the North kept itself in constant communication with the rebel government and the rebel armies, and thus, in a large degree, filled the place of spies in giving information. To furnish facilities for communication with its friends in the North, as also for various other purposes in aid of the rebel cause, the Confederate Government sent a number of its ablest civilians to Canada, at an early period of the war, as its secret agents, who established their headquarters at Montreal.

This cabal consisted of the following persons: Jacob Thompson, who had been Secretary of the Interior under Buchanan’s administration; Clement C. Clay, who had been a United States Senator from Alabama; Beverly Tucker, who had been a Circuit Judge in Virginia; George N. Sanders, William C. Cleary, Prof. Holcomb, George Harper, and others.

Of these, Thompson, Tucker, and Clay seem to have held semi-official positions, and we will designate them as Davis’s Canada Cabinet. The others named, as also others unnamed above, appear to have acted as aids, in a subordinate capacity, in the execution of their plots. They all claimed to be acting as agents of the Rebel Government.

It was in the summer of 1864 that Jacob Thompson, according to the testimony before the Commission, declared that he had his friends all over the Northern States, who were willing to go to any length in order to serve the cause of the South. Jefferson Davis’s Canada Cabinet kept up a constant correspondence with their chief, through secret agents who traveled directly through the states, and even through the city of Washington.

So potent was the aid of secret signs, grips, passwords, etc., as a means of recognition, and so universally were the members of these secret orders diffused over the country, that they could go anywhere. Should one agent find it necessary to stop his task for fear of detection, another would take it up; and where men could not go, women went, to carry communications.

The Canada Cabinet was well supplied with money by the government at Richmond, and in this department of the service Jacob Thompson seems to have been Secretary of the Treasury. He kept his deposits largely in the Ontario Bank of Montreal, and his credits there arose from Southern bills of exchange on London.

The object of the writer in this introductory chapter has been to place clearly before his readers the formidable character of the conspiracy, which, with the President of the Confederacy at its head, and organized by his Canada Cabinet, was intended to throw the loyal North into a state of chaotic confusion and bring to the aid of their sinking cause the disloyal element all over the North, by a series of assassinations which would leave the nation without a civil and military head and without any constitutional way of electing another President, and at the same time would deprive the armies of the United States of a lawful commander.

This was the last card of the political leaders of the rebellion, the last desperate resort to retrieve a cause that had been manifestly lost in open warfare. It may seem like temerity in the writer to make such a charge involving a total disregard of the laws of civilized warfare, and such utter moral depravity on the part of these conspirators, and to claim for their wicked project the approval of Jefferson Davis, but the evidence in the possession of the government and adduced before the Commission, it will be seen, fully justified the government in making this charge.

The persons brought before the Commission, though in full sympathy in sentiment with their employers, were merely the tools and hired assassins of the Canada Cabinet, acting under the advice and sanction of their chief. I shall now proceed to bring before my readers the denouement of their plot, and, from the evidence given before the Commission, show that the origin, scope and purpose of the conspiracy have been truly indicated above.

The extent of the conspiracy had not as yet been revealed; but enough was known to the government to evince the fact that this was an act of deep political significance, having behind it a very different class of men from the dissolute and depraved assassins who were executing their behests, and not merely done for the gratification of personal and political revenge.

It was obvious that the occasion called for the most vigorous and decided measures on the part of the government to meet and overcome the strategy of assassinations just now entered upon. It very soon became known to the authorities that the plot had been but very partially executed, and that the purpose of the conspirators was to subvert the constitution by depriving the nation of its executive head, and leaving no constitutional way of electing a new President, and at the same time to deprive the armies in the field of a lawful commander.

To accomplish this, the President, Vice-President, Secretary of State, and General Grant were all to have been assassinated. The conspirators in Canada and also the rebel president, when they heard that only President Lincoln had been killed, could not conceal their disappointment, and virtually confessed that their deep-laid scheme had proven a failure.